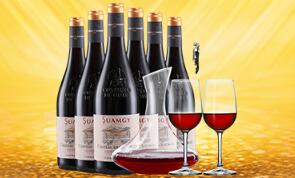 According to the American Heart Association, adults diagnosed with diabetes stand 2-4 times chances of contracting chronic diseases related to the heart in comparison to their non-diabetic counterparts.

There have been mixed debates when it comes to taking red wine as a diabetic, some claiming that red wine helps in reducing chances for getting a heart disease whereas other caution against taking it when you are diabetic.

Some studies have actually shown that, if you drink red wine or any alcoholic drink, there are high chances that your blood sugar levels will reduce though for a span of 24 hours only. The American Diabetes Association claims that you should monitor your blood glucose levels before taking the alcoholic drink, and throughout in the course of the next 24 hours.

This calls for caution and mindfulness when you are taking anything alcoholic as a diabetic. Alcoholic drinks from juice contain high sugars that can increase blood glucose levels.

Effects of drinking red wine as a diabetic

Other than impact on the blood sugar levels, red wine has also been found to have other health benefits to people living with type-2 diabetes.

In one of the studies, it was found that: if people with controlled type-2 diabetes took red wine (maximum of one glass a day), they will reduce chances or contracting heart diseases by quite a significant margin.

After two years the test subjects were monitored and measurements were taken. It was found that people who took red wine showed improvements in their blood glucose levels, high-density lipoprotein also increased whereas the levels of bad cholesterol reduced.

Previous studies have shown that: taking red wine irrespective of whether your blood sugar is at controlled levels or not has numerous health benefits. Some of the benefits include an improvement in post-meal blood sugar levels, blood glucose fasting levels and how the body uses insulin. Other studies went further to break down the research and found out that these benefits were not from the alcohol rather than components found in red wine. The main component responsible for this is polyphenol.

When it comes to taking alcohol as a diabetic, The American Diabetes Association leaves it up to the individual to decide. In controlled amounts it’s healthy but you should discuss your decision with your doctor.

In experiments on how alcohol affects people living diabetes, researchers aim to test the cardiometabolic of the body after taking alcohol. Different wines are used also used to test whether the type of wine also matters.

The results indicated that taking wine in moderate controlled levels actually lowered cardiometabolic risk mostly due to the ethanol. The hypothesis predicted that both red wine and white wine will have the same effect on body metabolism. The findings showed the opposite; due to different ADH1B genotype, they all reacted differently.

In this research, people were used as test subjects all who were above the age of 40 and had controlled diabetes. They were divided into 3 groups, one was assigned mineral water, the other red wine and the final one was assigned red wine. The final results indicated a significant improvement in triglyceride levels, waist circumference, blood pressure, liver function and genetic interaction in test subjects that took red wine.

Red wine has polyphenols and antioxidants all which benefit the body if taken in controlled amounts. As a diabetic, you can take advantage of all these added benefits but you should be sure to proceed with moderation.