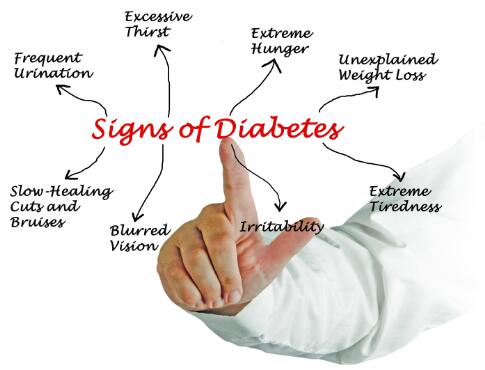 There are approximately 8.1 million people who are affected and undiagnosed with diabetes and they don’t have any idea about it, this comprises about 27.8 percent of the population. On the other hand about 21 million people are already diagnosed with this disease. An infected person may show symptoms that differ from the other patient; this means that diabetes symptoms differ from one person to another. Diabetes is a manageable disease if it’s identified earlier for the betterment of your health.

Its way better to get informed, this helps you to keep on a watch out of those signs and symptoms that define diabetes particularly if you fall under these categories.

Consult a physician if you ever experience these common symptoms that can easily define you to be a diabetic. The earlier it is for the betterment of your health.

Polyuria is as a result of excessive intake of drinks especially fluids i.e. water. This results to large production of urine and frequent urination. Kidneys absorb in water from cells and tissues in order to dilute the excesses sugar levels in your bloodstream. This comes about as a result of presence of high levels of sugar present in your blood stream. When filtering blood to produce urine, the kidneys reabsorbs sugar into the bloodstream but this is not the case to polyuria.in polyuria the kidney fails to absorb all the sugar and glucose into the bloodstream so the excess glucose in the blood ends being deposited in the urine where the body is forced to draw excessive amount of water from the tissues resulting to unusually large productions of urine. The cells keep on pumping water to bloodstream to help keep sugar levels on check. The normal daily urine output for ladies is around one to two liters but for those affected by polyuria usually pass more than three liters a day. It’s difficult to measure yourself so if you find yourself visiting a bathroom more often and you are spending a lot of time in there then counts yourself a patien

Polydipsia
it is linked to excessive urination. This condition of excessive thirstiness is considered as one of the early symptoms of diabetes. This condition is as a result of your body failing to use blood sugar and process it. When the body fails to make use of blood sugar i.e. process the glucose, then the latter gets abnormally high .the increase of blood sugar levels in your body results to thirst leading to excessive drink age of fluids. Most of the people affected by this condition term this thirst as unquenchable. Avoid drinking fluids that contain sugar e.g. soda or juice .this fluids contain high levels of sugar which will push the levels of sugar in your body higher leading to excessive thirst so as to flush out those sugars.

Extreme Fatigue
your body needs energy to perform its functions properly. It derives its energy from sugar which comes from foods that we intake especially those foods that contain carbohydrates and proteins. Pancreases produces insulin that allows your body to utilize sugar coming  from carbohydrates in the food we eat.it helps to keep your blood sugar either from getting extremely high i.e. hyperglycemia or very low. Insulin is usually defined as the key to which it unlocks cells to receive sugar and be used as energy. If you are diabetic it means that your body is not producing enough insulin for your body or your cells have developed resistant to the insulin’s effect. This makes the cells to yearn for sugar to perform their functions which leads to fatigueness.

Polyphagia
polyphagia is a term used to describe excessive hunger or increased appetite. It’s caused by blood sugar remaining abnormally higher. Sugar can’t enter the cells as a result of insulin resistance or as a result of no production of insulin at all this then trigger s hunger hormones to send impulses to the brain that tell the brain you are hungry leading to  Excessive eating. With excessive eating you will skyrocket blood sugars in your body it’s better to exercise rather than over eating.

Neuropathy
neuropathy is a Feeling of Numbness, tingling, in the extremes.it is a nerve disorder as a result of diabetes. It is a symptom of diabetes that grows progressively as time goes by since excess sugar does damage the nerves. Regular checking of sugar levels within standard range helps to alleviate any further damages to the nerves.

Slow healing of wounds
blood circulation is often affected when sugar levels are extremely high in the blood.

When you are diabetes it’s very important to treat wounds and cuts as soon as possible. High levels of blood glucose as a result of diabetes , with time leads to poor circulation of blood making it hard for the blood to reach affected areas for skin repair .this leads to the wounds to remain open and unhealed for months leading to fungal infections. Wounds failing to heal are a sure sign of diabetes.

Blurred Vision
Blur vision is one of the symptoms of diabeties.it can be caused by high levels blood sugar. It occurs when fluids are pulled out of your lenses in order to dilute the excess amounts of glucose in the bloodstream. This makes the lenses to completely dry making the eye to be unable to focus resulting to blurred visions. This condition can be alleviated by visiting a physician in time to have the eyes checked and if it’s severe it can be operated.

These symptoms do not usually define diabetes but it’s worth having this knowledge since not everybody experience those detailed symptoms.